I met Shubhendu Sharma in Kerala, India in December 2018, and within 45mins of watching his TedTalk recording and discussing the miyawaki method, I had regenerated the entire Congo Basin Forest in my mind. When I came back to Cameroon, the passion in me was so ardent that I had to do everything humanly possible to make what was in my mind a reality. 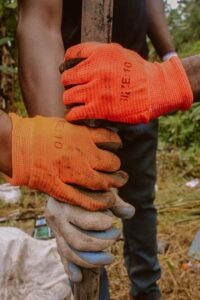 The desire to kick start a Miyawaki Revolution in Cameroon started bearing fruits in November 2019 when we planted our first miyawaki forest at the Bonduma water catchment. The 600 native tree forest supported by The SUGi Project was the first of many. There was a battery of opinions running wild during the tree planting exercise; ‘the trees are too close, how do they breathe’? ‘Why is organic manure added into soils that are already very rich’ (volcanic soils)? At one point, the team had to put their foot down and have the instructions followed to the latter. The catchment had become a dumping ground for all sorts of refuse and including disposable pads and baby dippers. One could not help but wonder how humans would so heavily pollute a water body that they depend on totally as a source of drinking water. Indeed, humans are strange beings!

Beyond human resources management, there were other challenges; getting good quality native saplings and mulching material was challenging. This is to say, we are in a forest zone but not many people grew native trees. We were used to taking from the forest but not giving back. Then, we had to include wildings to the seedlings we could find.  Then came the challenge of having to replant trees that had been uprooted by the children of the neigbourhood. This pointed to the fact that we needed to do more sensitization/education; a recommendation that was quickly adopted for the next planting site and that gave birth to The SUGi Akademy. This is a project that would provide conservation education to children between the ages of 8-15 in a bid to build the next generation of rewilders.

One year after the Bonduma forest was planted, even when no scientific data was collected on the depth of the water table etc prior to tree planting, we got some testimonies; ‘I noticed that the water is much cooler’ one woman said. Standing near the storage tank a young man told our team ‘this place is always dry but this time around it is not’. We saw several batches of bright yellow caterpillars and then butterflies and a variety of other both leaf and ground insects. The biggest insinuation of the locals however has been that the gods might soon be returning to the dwell in the neigbourhood. According to them, when the forests were destroyed the gods had to relocate.

Our coverage guy had to make magic to get good pictures and videos because of the topography. I remember some strong boys had to carry him up in order for him to get some good shots.  It was worth it I must say. The Bonduma water catchment forest was handed over to the community after 12months of constant picture taking, watering, de-weeding, nurturing, data collection, monitoring and shouting. One species from this forest that caught the eye of our forest friends is Communis edulis probably because of its round thorn-looking fruits. Locally, however, mostly the oil-rich seeds are considered important as it is milled locally and used in treating ailments, taming twins, chief naming ceremony and as body cream.

By March 2020, the team was planting another forest few kilometers away from Bonduma this time at the Bulu water catchment. Bulu was a real community deal as Chief Mafany came out severally in full traditional regalia- the traditional Shanja, shirt & cap and holding the symbolic staff of unity. The statement was loud and clear; the ancestors are well aware and united for this project. Pa Stephen (over 70) became the chief security officer of the Bulu forest, always walking around with a whip in hand ready to beat and scare detractors.

Many lessons learnt from Bonduma were addressed at Bulu; by February 2020, the team had gathered the much needed mulch (grass and farm waste), sensitization/education sessions had begun and a drone & better camera had been acquired. Again, getting good quality native saplings was still a challenge and although no highly scientific protocols were conducted still, we took note of the absence of some key species that indicated the health of a freshwater ecosystem like crabs, water daphnia (‘kaka bobby’). Yet new challenges sprang up; a good quantity of the mulch material was carried away by running water (due to the topography) and the remainder had rejuvenated and became weed. At some point the trees were dying because of too much water. The SUGi Global Rewilding Community came to our aid as we got techniques on how to help trees survive in water.

One year after planting, we have seen many burrowing animals, insects, birds and especially crabs and water daphnias etc. The forest is already self-reliant I would say as underground weeds can no longer survive under the already flowering trees. In fact, we are warming up for wild honey harvesting from the forest. The over 6m tall roadside forest already serves as a hideout for farmers from the scorching sun to many en route to various destinations.  The forest is so cool that even the very selfish Pachira aquaticas  aka money trees have finally given up the food they stored at the base of their stems. From a capacity building stand point, the team has gotten great lessons on the choice of native species and their combinations at planting.

As we gear up for our third forest, the Bwitingi water catchment forest, the stakes are really high. It is not just about climate change, recharging ground water & improving the water table, providing habitat for returning biodiversity & the gods, and restocking natural sources of non-timber forest products any longer, it is about helping a community live up to its name. According to the custodians of the culture of the Bwitingi people, Bwitingi means half water, half land. Apparently, when the Germans came into Buea they had difficulties navigating Bwitingi as half of the land was covered in water and hence its name. Today, the community has lost this sagesse as they only boast of one flowing stream. The revolution is on, Cameroon is not left out and we go miyawaki all the way.